First, make sure that you followed the instructions from the section detailing how to install your robot.

Especially, the screws in the Reachy's back and the ones fixatings its metal support should be well tightened.

If at anytime when you're working with Reachy you feel that you're losing control of the robot's movements, don't hesitate to turn the motors off. Use the switch button placed in its back. 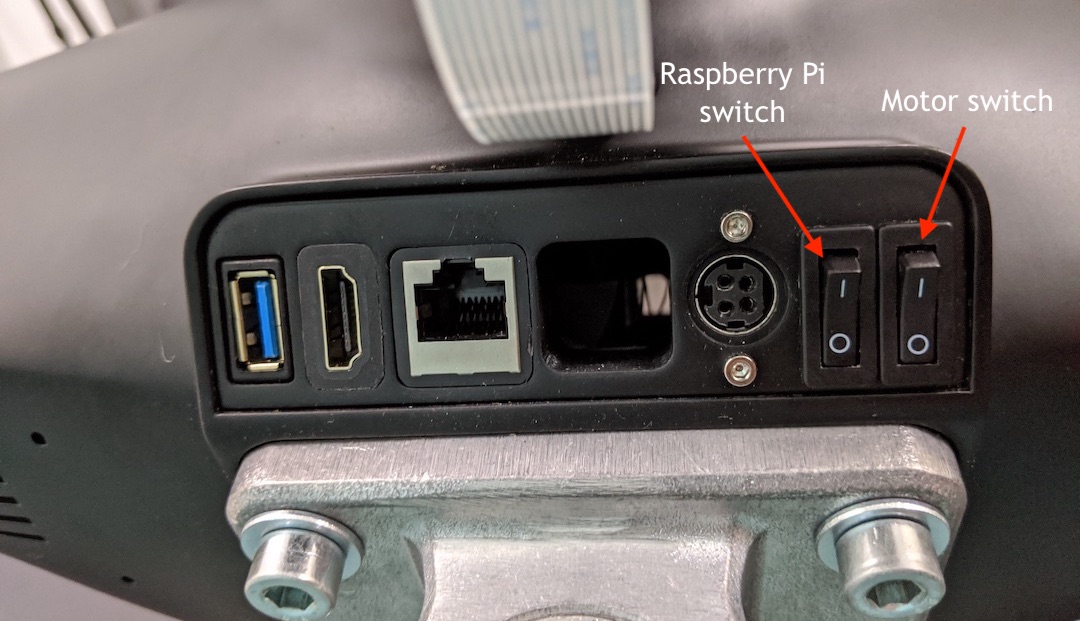 Also, don't forget to turn the motors off when you're done working with the robot.

Even though there is little chance that you get hurt using Reachy, you might get surprised by its movements, especially the first times.

We recommend that you move both Reachy's arms with your hands before you start programing it. The goal is that you get a sense of Reachy's working space, the positions it can reach so that you won't get hit when you actually send it commands.

There are a few things you need to know to make sure that your Reachy doesn't get damaged when using it.

Don't stay in stiff mode if you're not moving the robot

Each Reachy's motor can be in one of two compliance modes:

You can change the compliance mode of a joint with its compliant attribute.

or if you prefer to change the compliance of all the joints in a part of Reachy (left/right arm or the head).

For exemple, to put the motors in the right arm in stiff mode:

If you want to the right arm's motors back to compliant mode:

What you need to keep in mind

You must be careful not to let the joints in stiff mode when you're not using the robot. This mode can be really demanding for a motor, letting a motor in stiff mode will damage it after some time.

If an arm is lifted or if the neck is lowered, maintaining the position in stiff mode will be exhausting because the motors would have to compensate the gravity and they could get damaged. You can make the analogy with a human. If we ask you to keep stretched out arms, after a certain time it will be painful. So is the case for the joints of the robot.

Be aware of obstacles

When you are sending movements instructions to Reachy, be careful to obstacles that you could block Reachy during its movements.

For example, when you are asking to an arm to go between two positions, it will try to do it as hard as it can, whether or not there is something on its way. Also when you are moving both arms simultaneously, there are no safety measures implemented to prevent them from hitting each other. Nothing will also prevent Reachy's arms from hitting its chest if you ask them to. If situations like these happen, don't hesitate to turn off the motors so that Reachy's motors will stop trying to reach a position they can't get.